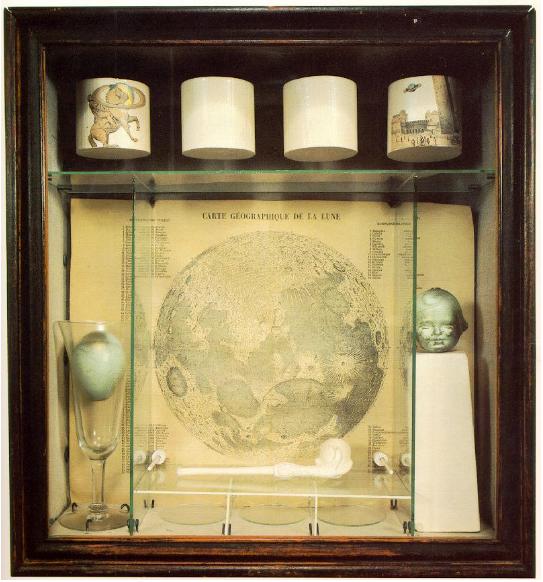 I started with ideas for two separate posts: one would feature Joseph Cornell's shadow boxes and another would feature an artist who painted a portrait I saw at a show at the National Portrait Gallery in DC. But a funny thing happened, when I looked up the artist David Eichenberg, to see more of his work, I found that he did a series of trump l'oeil paintings inside of cigar boxes that have a strange similarity with Cornell's pieces. So, I've combined the posts into one that shows two different takes on shadow boxes. A quick aside before the shadow box work - below is the painting from the National Portrait Gallery, called Duchess of Toledo, that mesmerized me and stuck in my memory. . . . Here are some of Joseph Cornell's shadow boxes. Cornell, had no formal art training, he searched for items that pleased him to create his art. He lived a reclusive life in Flushing, Queens with his mother and cared for his younger brother Robert who had cerebral palsy. . . . . . . . . Now, here are the works of David Eichenberg, an artist born in the 1970's in Toledo Ohio who uses traditional oil painting techniques in a new way. The images below start with the cigar box view and then show the detail of the oil paintings. . . . . . . . .
Tweet