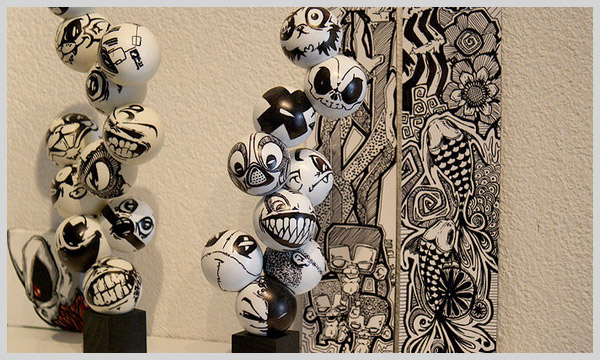 Tweet
When Swiss artist Bundeli Patrik, who goes by the name 2much, quit smoking, he took a much more original approach than just using a nicotine patch, instead he created a series of funny painted ping pong balls. While he created these funny little creatures several years ago, I got such a kick out of them I couldn't resist sharing them. Here's how he describes his creative process:

These sculpures were made during, the very hard time, where I stopped smoking and was searching for a meaningful alternative... My solution was to buy a package of those balls and everytime I had the urge to smoke a cigarette, I would start painting one of those balls. Since I was used to smoke A LOT, soon after a short while I had a very large number of those balls and were already filling them with cotton and glued them together to create "THE TOTEMS"

. . . . Apparently, the experience quitting smoking left 2much with a new desire, which he describes here, to protect innocent ping pong balls:

Initiated by 2much for the first time in 2008 the project "save the balls" is meant to provide a violence free and safe shelter for abused ping pong balls. Month after month, millions and millions of those poor balls are cruely abused by hard beatings from the ping pong-racket and some balls have to endure gruesome smash-beats with up to 170 km/h, which deforms the ball up to 25% percent of its original size. 2much is dedicated to stop this unnecessary violence and begs you not to look the other way! Every ball bought from 2much is one more ball in safety.